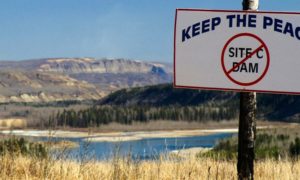 In January 2016, the Communist Party of BC issued the following statement, urging the provincial government and BC Hydro to cancel the Site C dam project.

The Communist Party of BC expresses our full solidarity with the growing movement to halt the destructive, expensive and unnecessary Site C dam project on the Peace River. We urge BC Hydro and the provincial government to cease all preparatory work for this project, and to drop legal proceedings and threats against those who are using their democratic rights to express their opposition to Site C.

The facts about this project are very clear, starting with the truth that the federal and provincial governments have failed in their responsibility to uphold the terms of Treaty 8, which promised the signatory First Nations across a vast area of Alberta, Saskatchewan, British Columbia and the Northwest Territories that they would be able to continue their traditional practices of hunting, trapping, fishing, and collecting medicinal plants “for as long as the sun shines, the rivers flow and the grass grows.”

As many court cases in recent years have proven, the Canadian state is obligated to engage in meaningful consultations with First Nations regarding economic developments on their traditional territories. The days when racist governments and corporations could simply trample on the rights of indigenous peoples in Canada are gone forever. Site C cannot proceed without the full consent of Treaty 8 First Nations, and since there has not even been a token attempt to win such consent, the project is completely illegal.

Beyond this, there are many other powerful reasons to oppose the Site C dam, which will flood some of the best agricultural lands in northern British Columbia, and deal a devastating blow to wildlife in the area. The arguments by the Liberal provincial government and BC Hydro, which claim that the dam must be built to generate electricity for economic development or export, are patently bogus. Rather than spending over $8 billion to destroy the environment of the Peace River valley, B.C. Hydro and the province could invest in conservation measures which would be far less expensive. The real reason for this project is to provide power for the government’s nightmarish plan to expand fracking on a massive scale, and to make British Columbia even more dependent on extraction and export of hydrocarbons and other unprocessed raw materials.

This economic strategy is based on hopes that energy prices will rebound in the near future, and on unproven assumptions that a combination of huge tax breaks and low-cost electricity will lure big energy transnationals to make multi-billion dollar investments in British Columbia. Even if these unlikely claims were true, this strategy is a direct threat to the global environment, since it will result in a major expansion of carbon emissions, which are a key factor in unchecked global warming and climate change.

Site C is a wildly speculative gamble which could throw away billions of taxpayer dollars. It is a serious violation of First Nations treaty rights, and a threat to the people and environment of northern BC, and to the global climate. This fatally flawed project must be blocked now by the power of public opinion. We stand with the protesters at Rocky Mountain Fort, and with all those who demand to end this dangerous fiasco immediately.